MODULE TWO: WHO HAS THE POWER?

In the first meeting you met the participants, discussed the program, set guidelines for your meetings, and started to discuss and define violence. This module will build on what was addressed in the last meeting by examining the issues of power and control. Participants will be introduced to the idea of power in society. Participants will think about power as the idea of control or influence over another person or group, and will assess how that kind of power can be used negatively or for personal gain. Participants will also evaluate which groups and people are granted power in society. Finally, they will analyze the ways in which oppression and abuse of power, whether between individuals or groups of people, will continue violence in our society. This is a lecture heavy session so it suggested that you allow for a stretch break between Activity One and Activity Two.

THE PURPOSE OF THIS MODULE IS TO BUILD ON THE PREVIOUS CONVERSATION WHILE INTRODUCING THE CONCEPTS OF POWER, PRIVILEGE, AND OPPRESSION.

Instruct participants to sign in. Ask the participants how their week is going. Take a few minutes to discuss topics of interest, such as a recent sports game. Review guidelines established during Module One.

Explain that today’s discussion will be focused on power in our society and how power is used in both positive and negative ways by different groups.

THE PURPOSE OF THIS ACTIVITY IS FOR THE PARTICIPANTS TO HAVE COMMON DEFINITIONS OF POWER, PRIVILEGE, AND OPPRESSION WHILE IDENTIFYING WHAT EACH BEHAVIOR LOOKS LIKE IN SOCIETY.

Provide participants with the Guided Notes worksheet and pens. Facilitate a brainstorming session around power, privilege, and oppression using the discussion guide and definitions provided. As you brainstorm each topic, record student responses to use as a reference point throughout the discussion. Explain that these terms will help to inform the community tool (the fotonovela) the participants will be creating and will be a part of discussions going forward. Having shared definitions of these terms will help to develop a cohesive community tool that everyone agrees on.

Sample responses include: having great influence or control over others, strength, ability, faculty, or skill (having special power), or might. Examples include the President of the United States or principals.

Instruct participants to write down answers in their Guided Notes. Provide the definition for the group. Power is the ability, but not necessarily the right, to control individuals or things. A person, group of people, or a system can have power to influence and control other organizations and/or people. Examples include when someone uses their force or power like when a bully picks on someone.

Sample responses include: a special benefit, something one person gets to do that others do not, a behavior or action that is not automatically granted or given.

Instruct participants to write down answers in their Guided Notes. Provide the definition for the group. Privilege is an invisible set of unearned rights, benefits, or assets that belong to certain individuals simply by virtue of their membership in a particular group. An example is when seniors leave campus at lunch time because they are upperclassmen.

This may be more difficult for the participants to define. If the participants struggle with this, provide them with the definition. Oppression is regular and accepted mistreatment of one group of people by another for any reason.

After providing the definition again, ask them to provide examples of oppression in world history. Some examples include: (1) slavery of Jews in Egypt, Africans (and then African Americans) in America, (2) women in many countries throughout recorded history, (3) African Americans living in the Jim Crow era under unconstitutional laws, institutional racism, and discrimination, or (4) the Holocaust.

THE PURPOSE OF THIS ACTIVITY IS TO INTRODUCE CORE CONCEPTS THAT ARE RELATED TO -ISMS AND OPPRESSION.

Provide the Oppression is … handout.

Review the definition of each -ism. Review concepts and paraphrase the core concepts in language that feels comfortable to you. 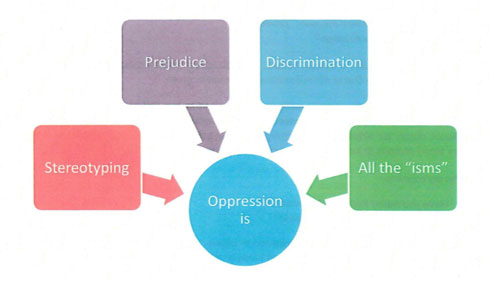 Start with the definition of stereotypes. A stereotype is an over simplified idea of a particular type of person or group that is widely held by many people. If appropriate, you can ask participants to provide examples of stereotypes they know of or have experienced.

Review the definition. Prejudice is personal judgment about a group. The judgment impacts the way you see or treat that group. Racism is a type of prejudice that is used to justify the belief that one racial category is somehow superior or inferior to others. The Ku Klux Klan is an example of a racist organization; its members’ belief in white supremacy has encouraged over a century of hate crime and hate speech.

Review the definition of discrimination. Discrimination is when a system uses stereotypes or prejudice to treat individuals or groups differently. For example, neighborhoods with more people of color are often likely to have more law enforcement patrolling because of the belief that there will be more violence in those neighborhoods.

The “isms” describe oppressive behaviors such as discrimination, stereotyping, or prejudice that are based on the following:

Using examples of oppression in world history cited above to connect these two concepts. When a person is viewed as “less than” or not our equal, it becomes easier to see that person as less human and to deny equal rights or access and even inflict violence upon them.

Some people who have more power than others try to use that power in a negative way, like bullying others. As individuals, we can choose to use the power we all have, our voice, to speak up when we see that happening. Let participants know you are going to talk about our individual power and how this power can be used to create positive change. This is called bystander intervention.

Ask participants to think of a time when someone used their power in way that negatively affected them. If appropriate, you may provide personal examples from your life.

Examples include, but are not limited to: a time someone judged you, your ability, and/or your moral character based solely on your race, ethnicity, or age. After sharing your personal experience, explain that power is used in positive and negative ways. You can choose to use your individual power in a positive way when you see one person or group who has less power being treated unfairly by someone or a group who has more power.

Solicit questions from participants and close out the conversation.

CLOSING AND PEAK AND PIT OF THE SESSION: (5 MINUTES)

Remind participants that they will be developing a fotonovela as mentioned in Session One. Topics from each session will be integrated into the final product.

As part of the closing, you will to ask everyone to say what the peak and the pit of the session was.