MODULE FIVE: BEING AN ALLY

This Module discusses being an ally and how to support all peers who may be experiencing teen dating violence. This module builds on the previous module which set the foundation for non­violent bystander intervention. The discussions in this module will remind participants of what power is, explain the concept of allies, bystanders, and non-violent ways to intervene. It will confirm their understanding through interaction and application to real world scenarios regarding healthy ways to engage in bystander intervention.

State that this session will focus on bystander intervention.

THE PURPOSE OF THIS ACTIVITY IS TO INTRODUCE THE IDEA OF BYSTANDERS AND ALLIES.

Brainstorm a definition of bystanders and allies together.

Ask if anyone knows what a bystander is. Accept and record all of their responses. Bystanders are people who see or know about a problem or incident.

Ask participants to define allies and record their responses on the flip chart or white board. Allies are bystanders who make positive, helpful choices.

Ask participants to review the definition of violence that was used in the first meeting. “Violence is anything that denies human integrity and leads to hopelessness and helplessness.” – Dr. Martin Luther King.

Each of us has individual power. We have the ability to influence others and to act. Allies are people who use their power in a positive way to help when they witness an unhealthy or inappropriate behavior as a bystander. We can use our power as allies to promote healthy relationship behaviors.

Give each participant at least one of the Ally/Bystander cards. Instruct them that they have to decide if the action that is on the card is that of an Ally or a Bystander. Guide the discussion and provide clarity as needed. If appropriate, share your personal experiences.

THE PURPOSE IS TO DISCUSS THE “POWER IN NUMBERS” AND HOW TO CREATE COMMUNITIES OF SOCIAL CHANGE.

Show The First Follower film. Link the conversation of bystanders and allies to the film by facilitating a conversation with participants using the discussion questions below.

We each have the ability to act and make change. As allies we can create a movement for change.

Responses may include, but not be limited to: by being role models for healthy behavior; .by speaking up when we see violent behavior instead of pretending we don’t see It at all; by raising awareness and promoting education about healthy relationships and non-violence in general.

We can use our power as allies to create change that promotes non-violence and social justice. Social justice is the idea of creating a society based on the principles of equality and solidarity that understands and values human rights, and recognizes the dignity of every human being. You explored what you felt your rights and boundaries were as an individual in your relationships. This idea extends those rights beyond you as an individual and ensures everyone’s rights and boundaries are respected.

In preparation for the next activity, write the definition of social justice on the board/poster board. Social justice is the ability people have to realize their potential in the society where they live to lead a fulfilling life and be active contributors to their community. Regarding teen dating violence, only a small number of boys/men abuse their partners. It is the responsibility of those who don’t abuse their partner to hold the abusive boys/men accountable. This can be done though non-violent intervention.

Bystander intervention, or being an ally, is the way that we create social justice for everyone in our communities; by standing up and doing what is right for others.

Relationships are complicated. Those abused may feel ashamed, trapped, or that they may be judged if they disclose what is happening. Relationships are personal and because of this it is difficult for others to be allies. We also each have different boundaries and ideas about what are acceptable behaviors in relationships.

THE PURPOSE OF THIS ACTIVITY IS TO ALLOW PARTICIPANTS TO PRACTICE RESPONDING TO DIFFERENT SITUATIONS.

Read from the Dating Violence Continuum cards aloud, one at a time. State that participants should react and respond as if they have witnessed the behaviors in real life.

Facilitate a discussion around what participants’ responses would be to the behaviors they identify.

Guide participants as needed toward appropriate responses. Review the sample student responses and suggested responses below:

*The words victim and survivor can be used interchangeably. For purposes of this curriculum survivor is the preferred term.

PARTICIPANTS RESPOND BY YELLING AT THE ABUSIVE PARTNER

PARTICIPANTS SAY THEY WOULD DO NOTHING

Standing by in silence may be perceived as condoning or indirectly supporting the unhealthy behavior. It may also make the survivor feel like the behavior is acceptable to others and may reinforce the idea they should not seek help. If participants don’t feel comfortable speaking to the survivor directly or if they have an immediate concern for the survivor’s safety, they should talk to a trusted adult.

PARTICIPANTS SAY THEY WOULD TALK TO AN ADULT

This is a positive response. Ask participants to describe more about which adults they consider safe to talk to. Discuss how would reach out to these adults.

Remind participants that today you explored power, what it means to be an ally, and bystander intervention. Ask participants if they know how to help a friend who may be in an unhealthy relationship.

PEAK AND PIT OF THE SESSION: (5 MINUTES)

As part of the closing you will to ask the group members what was the peak and the pit of the session. Record a summary of their answers in the Group Process Notes. 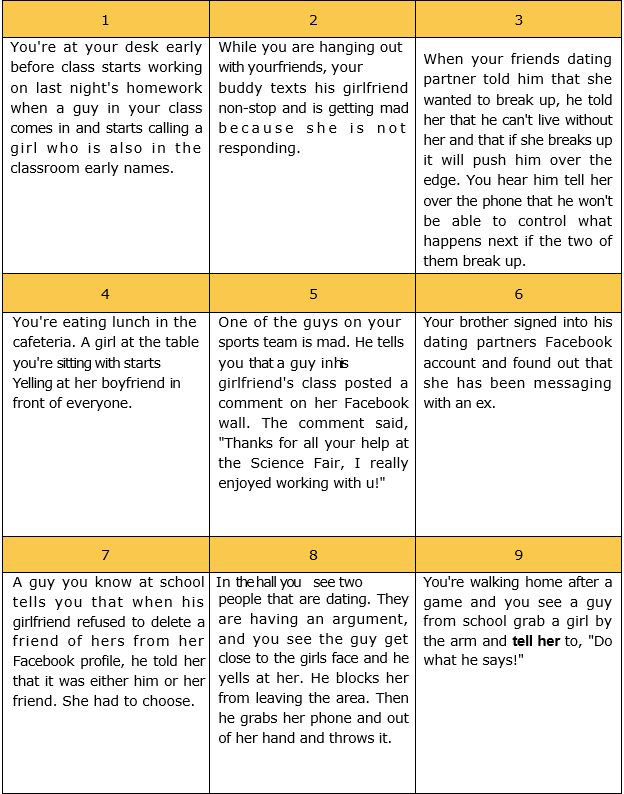